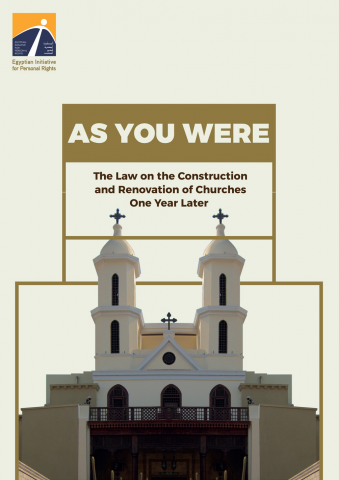 On September 28, 2016, Law 80/2016 was adopted to regulate the construction and renovation of churches and their annexes. State officials, parliamentarians, and some sectors of the Christian ecclesiastical leadership heralded the new law as a solution to the long-standing difficulties of building or renovating churches.

They said the law would reduce sectarian tensions and violence caused in part by the ambiguous legal framework regulating Christian religious practice. In contrast, members of the human rights community and Coptic activists offered critical observations prior to its adoption. They said it would further entrench religious discrimination and legitimize the al-Azabi Pasha Conditions, the previous guidelines which made building a new church an extremely complex  process.

While the law was under discussion, the Egyptian Initiative for Personal Rights launched a campaign titled, “Closed on Security Grounds: For a Fair Church Construction Law.”

The campaign sought to highlight the most significant hurdles to Coptic citizens’ exercise of their right to worship and religious practice, as exemplified by the administrative and security complications involved in the construction of churches. The EIPR noted during the campaign that the persistence of these barriers is the most significant driver of sectarian violence, particularly following the revolution of January 25, 2011.

The EIPR also released an in-depth commentary on the new law detailing reservations about its content and the process that culminated in its passage. The new law simply codified the de facto flagrant discrimination against Copts seeking to exercise the right to worship. This was clear in the law’s complex conditions for approving new church construction and its provisions delegating construction regulations to the security apparatus. This is a recipe for sectarian violence, which contradicts the declared objective of the long-awaited law.

The EIPR also criticized how the law was drafted and ultimately adopted, a process that took place in closed discussions limited to government representatives and the Egyptian Coptic Church. There was virtually no input from civil society, regular citizens, or even parliamentarians themselves, as if the matter of regulating a fundamental constitutional right were a purely ecclesiastical/security issue that did not concern Egyptian Muslims or Copts.

EIPR then issued a study titled “Closed on Security Grounds: Sectarian Tensions and Attacks Resulting from the Construction and Renovation of Churches.” The report sets out the findings of legal and field research on the obstacles to Coptic Egyptians’ exercise of the right to worship, which obstacles the new law fails to comprehend, let alone address. EIPR hoped that the campaign and the study would help clarify the magnitude of the crisis, which was unreflected in the law, and spur key players, government bodies, parliamentarians, civil society organizations, and religious institutions to ensure that implementing this law will not further restrict new church construction. In light of its conclusions, it was hoped the study could build momentum for amending the flawed law in the foreseeable future.

Nearly a year after the law was issued,  EIPR releases a new report on its implementation, examining whether it has alleviated sectarian tensions associated with the construction of churches and remedied the discrimination in the right to worship. The report also offers an assessment of major player’s roles by analysing the official decrees issued for the construction of new churches, and it looks at the formation of the committee tasked with legalizing the status of existing churches.

The report contains an analytical section and an annex. The analytical section discusses the executive decrees issued by the administration and published in the Official Gazette, as well as relevant statements from government officials. It also contains EIPR’s commentary on the prime ministerial decree that formed the committee to resolve the status of existing, functioning churches. Additionally, this section analyses incidents of sectarian violence and tension associated with Christian practices that occurred from the adoption of the law on September 28, 2016 through the end of October 2017. That 13-month period saw 20 such incidents, including official responses and interventions. The annex contains a detailed documentation of these incidents.