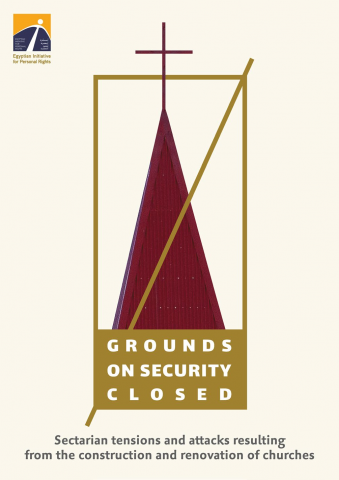 The Egyptian Initiative for Personal Rights issued a study today titled “Closed on Security Grounds: Sectarian Tensions and Attacks Resulting from the Construction and Renovation of Churches.” The study examines the obstacles to Coptic Egyptians’ right of worship, which the new law on the construction of churches failed to comprehend, and it urges major actors in government agencies, parliamentarians, civil society organizations, and religious institutions to assume their responsibility to ensure that the implementation of the law does not further restrict the construction of churches. It also recommends they lobby for changes in this flawed law in light of the conclusions of the study, especially since the construction and renovation of churches is a primary driver of sectarian violence.

Last August, the House of Representatives passed Law 80/2016 on the construction of churches, thereby fulfilling a constitutional requirement, despite and over the strenuous objections of a broad segment of Copts and civil society organizations. The EIPR launched a campaign, “Closed on Security Grounds,” during the discussion of the law, attempting to highlight the most significant barriers to the exercise of the right of worship by Egyptian Coptic citizens, demonstrated most clearly in the security and administrative complications involved in building churches. The EIPR stressed in its campaign that the perpetuation of such barriers are one of the most significant causes of sectarian violence.

The EIPR said that the new law simply codifies the existing flagrant discrimination between Egyptian citizens seeking to exercise their right of worship. It does so by establishing extremely onerous conditions for the approval of new churches and investing the power to regulate the construction of houses of worship almost exclusively in the security establishment, which is a surefire recipe for reproducing the drivers of sectarian violence. A broad segment of citizens and state agencies are implicated in such violence, which is often justified by reference to the law, particularly in informal areas or the Egyptian countryside. Constructing a church requires approvals that could take decades, and at times even after such approvals are granted, citizens are unable to actually build or inaugurate the church due to objections from local residents or interventions by the security apparatus itself.

The study includes an analytical section and two annexes. The analysis reviews statutes regulating church construction, significant court rulings of relevance, and their impact on the legal status of existing churches and various official licenses. The study then looks at the types and frequency of sectarian attacks linked with the exercise of the right of worship, offering a quantitative analysis of the 74 sectarian attacks seen in Egypt from January 25, 2011 to August 2016. It describes the flashpoints of tension, the profile of attacks and their relationship to political parties or governing forces, and whether patterns changed in tandem with changes in regime.

The section concludes with the EIPR’s commentary on the new church construction law, issued on August 31, 2016.

Annex 1 of the study documents in detail incidents of sectarian violence associated with a dispute over the construction of a new church or the renovation of an existing one. Annex 2 describes a set of minimum standards that must be met in any law regulating the construction of churches, also examining case studies in the regulation of the construction of houses of worship taken from several countries.

The study offers several recommendations. To civil society, it recommends continued pressure to force full transparency in the proceedings of the new committee tasked with examining the status of existing churches and ensuring that its decisions and operation are covered by the media. It also urges civil society to continue to lobby for fundamental changes to the new law regulating the construction of churches, based on a foundation of the equal right of all Egyptians to worship and engage in religious practice.

To parliamentarians, the study recommends taking the initiative to introduce core amendments to the new law that do away entirely with the principle of prior authorization from administrative bodies based on the assessment of the area’s needs and the size of the population. Parliamentarians should limit conditions for the construction of churches to those found in existing building codes.

Finally, the study urges the government and representatives of Egyptian churches to ensure that the committee tasked with examining the status of existing churches operates with full transparency and releases its operating methods and decisions to the public to guarantee a minimum of social dialogue.