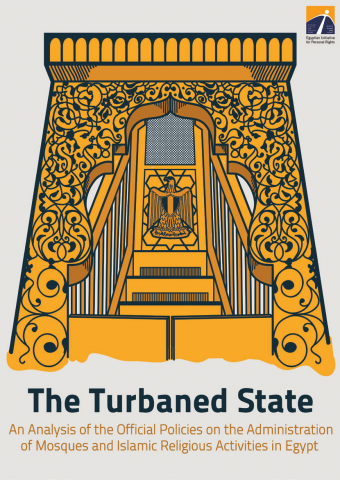 To whom do Minbars belong today?

For centuries, the Egyptian state has maintained policies based on the model of the Caliphate in its administration of mosques. Policies of all modern political administrations employed different authoritarian tools against challengers to teachings of the official religious institutions thus infringing on the rights of Muslims who don’t wish to follow the state’s interpretation of religion.

After the ouster of former president Mohamed Morsi and despite constant, vehement emphasis on having ousted him to keep religion out of politics, the post 30th of June political administration has escalated authoritarian control over religious discourse. A hotline was created for citizens to report any violations of the state “instructions” or the use of preaching at mosques for political purposes- a prohibition that practically exempts support for the current political administration. On his last days in power, former President Adly Mansour issued a law that made preaching without authorization from the official religious institutions punishable by three months to a year in prison in addition to a significant fine. The state moved to control all central mosques angering some worshippers who objected to the arbitrary replacement of their favorite preachers. In one instance, the praying crowd physically removed the government-appointed preacher from the Minbar calling for police interference to disperse the outraged crowd.

“These policies have always been used as a tool by those in authority against those outside of it, despite the constant claim that the objective is to keep politics out of the mosque,” said Amr Ezzat, the author of a recent study issued by the Egyptian Initiative for Personal Rights under the title of “To whom do Minbars belong today?”.

The study looks at official policy shifts in the administration of mosques in Egypt's modern history, starting with the emergence of the modern centralized state all the way to the rapid changes seen after January 2011. It focuses on policies under the Muslim Brotherhood government (2012-2013) and then the controversy over the intensely centralized policies pursued by the state to control sermons and preaching in mosques since the ouster of former President Mohamed Morsi (2013-2014).

Throughout the past four years of turmoil, the theme of using mosques and Islamic discourse as a tool to establish political legitimacy has continued based on an imagined ideological and religious unity of all Muslims, the study said. In that pursuit, the state has acted as the religious leader or the “Imam” of the nation and strived to censor religious expression that threatens politico-religious unity.

In doing that, the state serves the goals of the same movements of political Islam it excludes by further solidifying religion as a primary source of political legitimacy and opening the religious public domain to political conflict.

State policies for the administration of mosques are not consistent with the concepts of citizenship and religious liberties. The study’s review of these policies and their outcomes indicates that state policies have forged an arena for conflict over the appropriation and use of an assumed unity of Muslims. In turn, this has given rise to an ongoing crisis given the reality of pluralism and diversity, which requires the constant monitoring of religious activity or attempts to ensure compliance through oversight by security agencies or a network of political and religious alliances, to curb and contain this reality or regulate conditional authorization. As a result, these policies are always linked to political conflict and the politico-religious legitimation of the ruling authority, although the stated goal of these policies has always been to keep mosques out of politics.

These policies are authoritarian tools that entrench the power of the existing regime, putting the state apparatus in service of maintaining the authority of the current ruling political power and serving the religious tendencies that support or negotiate with it. In contrast, they weaken the sphere of social action and criminalize all unwanted religious trends.