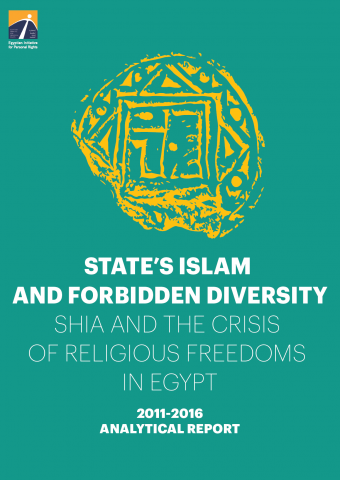 The Case of Religious Freedom of Shia Egyptians

The Egyptian Initiative for Personal Rights issued an analytical report today titled “Restricted Diversity in State Religion: The Case of Religious Freedom of Shia Egyptians.” The report documents and analyzes developments of the status of Shia Egyptians as a case study of the crisis of Muslim citizens adhering to sects other than the dominant state-sanctioned one. It looks at official religious policies that restrict religious diversity in Islam, incitement to hatred, discrimination, violence against Shia, and violations of other human rights from January 2011 to May 2016. EIPR researchers documented 70 relevant incidents that offer a broad picture of religious policies and Egyptian Shias’ demands, the violations and restrictions they encounter, and the domestic echoes of regional sectarian tensions.

Significant incidents examined by the report include the killing of Sheikh Hassan Shehata and three of his followers in Zawyat Abu Musllam in Giza in June 2013, the imprisonment of five Shias in different cases of six months to five years, and an incident in May 2016 in which a Shiit citizen accused Homeland Security in Alexandria of detaining him before and after a trip to Iraq to visit religious sites and torturing him with electroshocks. The report also includes examples of hate and discriminatory speech against Shia citizens. In a significant incident, for example, Under-secretary of The Ministry of Islamic Endowments incited violence against Shias on television, saying they should “be killed here and there.”

Amr Ezzat, an officer for EIPR’s freedom of religion and belief program, said, “The report traces developments relevant to the evolving status of religious freedom for Shia Egyptians, not only in terms of a right that should be guaranteed for the sect or individual citizens belonging to it, but also regarding the violations and restrictions faced by the community. In this sense, the Shia community illustrates the nature of the barriers to the exercise of freedom of religion and belief more generally, for other sects, the wider citizenry, and even the Sunni majority itself. It also shades the light on the problematic issue of diversity within Islam, especially to the case of the Sunni-Shia divide, which is a special case of intra-Islamic diversity because it is linked to disputes over models of authority and their legitimacy.”

Ezzat added that the report looks closely at the overlap between politics and religion that is manifested in historical conflicts over the pre-modern forms of governance, the caliphate and contemporary regional tensions between states whose religious policies protect a particular sect, whether Sunni or Shia, such as Egypt and Arab Gulf states, as well as Iran. These policies in turn inflame sectarian religious tensions, already politicized, such that citizens from the minority sect are treated as actual or potential foreign agents or their beliefs are seen as a result of infiltration by hostile parties that must be suppressed.

The report sets the violations it examines in the context of incitement to hatred, violence, and discrimination against Shia Egyptians coming from numerous directions: first and foremost official religious institutions and state-owned media, as well as the major Islamist political currents, including the Muslim Brotherhood, Salafis, and other small groups, some of which are devoted entirely to anti-Shia propaganda. Some privately owned media also provided unbalanced coverage that incited to hatred and allowed a considerable space to incitement to discriminatory speech against Shias. Correspondents at one private newspaper participated in violating the privacy of home owned by a Shia leader, in conjunction with anti-Shia activists.

The EIPR recommends several urgent steps in the short term and urges a radical reform of official religious policies to ensure freedom of religion and belief, religious diversity and to defuse sectarian and communal tension that could lead another killing of Shia Egyptians or involvement in regional conflicts with sectarian dimensions.

The EIPR cautions that current religious policies in effect give the state a monopoly on the practice of Islam—a state that lacks any policies for engaging with intra-Islamic diversity. State institutions view any form of religiosity at odds with the state religion, including Shia Islam, as unsanctioned and categorize it as antithetical to the public order. Adherents of these unsanctioned sects are in turn subject to restriction, harassment, and discrimination, and are denied freedom of expression and the right to worship and manifest their beliefs. They may also be subject to communal violence, prosecution, imprisonment on religious defamation grounds, or unlawful detention and torture. Although the central state oversees Islamic preaching and outreach through al-Azhar, the Ministry of Endowments, and the Fatwa Office (Dar al-Ifta’) in an effort to confront violence and extremism, these institutions, along with other state bodies, are implicated in incitement to hatred, discrimination, and violence against minority Islamic communities. In addition, the security apparatus has tolerated activities anti-Shia propaganda by some Salafi groups, and there are indications of cooperation between security and these groups.

Among the urgent measures recommended by the report is for the state to take a firm position against incitement of hatred, violence, and discrimination against Shias, whether perpetrated by Salafi groups, state agents, or media figures. Numerous complaints filed largely against anti-Shia activists have not been diligently addressed. At the very least, administrative measures must be taken against state employees who make statements that incite to hatred, violence, or discrimination against a particular class of citizens.

The report also recommends repealing Article 98(f) of the Penal Code on religious defamation, which is used to prosecute Shias and others with variant religious expressions.

The report recommends respecting every religious community and sect’s right to establish houses of worship without state recognition or assessment. Failing this, temporary measures should be instituted to protect the right of Shias and other unrecognized religious groups to meet for worship or religious study in associations or centers and to confront incitement against or harassment of their gatherings.

The report notes that these recommendations all require oversight of the performance of security and administrative bodies, to ensure they respect privacy and the sanctity of private life and are not involved in discriminatory practices in places of study or work against those adhering to unorthodox religious ideas.

The report also recommends establishing institutional frameworks to confront discrimination, such as through an anti-discrimination commission, which the state is obligated to take steps toward under Article 53 of the constitution.

Finally, the report urges the rights community and political parties to take on the issue of freedom of religion and belief and to wage battles for it side by side with the struggle for democracy. These groups should integrate the demands of Shia and other religious groups claiming their rights into a broader rights-oriented, democratic framework in order to cement genuine freedom of religion and belief and reform official religious policies.

The EIPR has previously published a set of papers and studies looking at aspects of state religious policies, including a position paper on the Azhar regulation law, The Turbaned State: An Analysis of the Official Policies on the Administration of Mosques and Islamic Religious Activities in Egypt, and Permission to Pray: The Crisis of Freedom of Houses of Worship in Egypt.