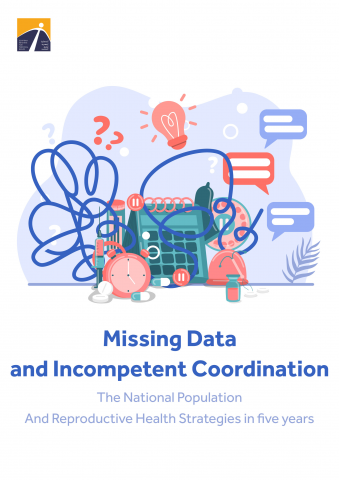 The Egyptian Initiative for Personal Rights (EIPR) previously commented on the principles and mechanisms of implementing the two aforementioned strategies, and a number of experts shared their reservations regarding the focus of the first strategy on the birth control approach to limit the population increase, without securing women's reproductive rights  to make free and informed decisions regarding their bodies. And criticized the second strategy’s lack of quantitative data, targets and indicators for improving reproductive health services.  This paper focuses on the key aspects of family planning and reproductive health as a model for the deficiencies and failures revealed over the past five years.

The National Reproductive Health Strategy relied on the Demographic Health Survey (DHS) to be the source for compiling these indicators, however, the databases of this survey have not been updated since  2014.

As for the evaluation indicators, the indicators adopted by the two strategies have varied, yet many experts and specialists consider the low birth rate monitored by the census of the Central Agency for Public Mobilization and Statistics - as the most important indicator of the improvement of reproductive health status in Egypt. And by extension, the low rate is celebrated as an achievement in itself. However, we agree with the opinion of a number of other experts that this indicator is not sufficient to measure the improvement of the reproductive health situation, especially with the failure to examine and research the causes of the decline, and whether family planning campaigns and birth control initiatives have effectively contributed to that decline. The Family Planning Sector and the National Population Council do not publish periodic reports, so all available information are shared through media statements from the Cabinet or the official spokesperson of the Ministry of Health and Population.

The previous examples indicate a severe insufficiency in the availability of data on family planning and reproductive health services in general, and a great difficulty in accessing data related to family planning programs and campaigns in Egypt, which impedes the analysis and evaluation of these efforts. The current source of information on patterns of contraceptive consumption is the internal reports and databases of the family planning sector, which are compiled by the Ministry of Health and Population through a “TA 8” form, provided by each clinic that provides family planning services, and the consumption is determined on the basis of the number of dispensed contraceptives. The health units send the gathered data on dispensed quantities (such as pills, IUDs and other contraceptives) to the National Population Council, in addition to the clinics supervised by of the Ministry of Social Solidarity through the "Two is enough" program, and the non-governmental and charity associations. The National Population Council receives reports of dispensed contraceptives from each governorate through the National Population Council local branches, totalling 27 branches across the country. This information is collected at several different levels until it reaches the Ministry of Health and Population, which uses it to calculate fertility rate, contraceptive prevalence rate, and type of method.

There is also no accurate knowledge of women's consumption of contraceptive methods through the private sector, due to the gap in available data on consumption patterns in this sector. The Egyptian Pharmaceutical Trading company sends periodic reports to the National Population Council, but these reports do not reflect the reality as they provide information regarding the distribution of pills and not their consumption "off the shelf", meaning that it lists the units dispensed but not used. It is worth noting that the public sector covers approximately 57%, while the private sector covers 43% of contraceptive consumption, which of course magnifies the information gap. In addition, the information collected at the health unit level is not sufficient, it is concerned only with the rate of contraceptive use and adherence, which does not indicate the nature of consumption and on what basis women make their reproductive decisions. This represents another example of the need to conduct national surveys aimed at understanding the nature of contraceptive use among women, and analyzing the factors affecting their adherence and/or discontinuation of contraceptive methods and their satisfaction with reproductive health and family planning services.

Lack of follow-up and evaluation

Since the launch of the two strategies, no progress reports have been published to evaluate their implementation, as all official updates regarding them are limited to news and quantitative official statements that do not express the challenges and successes of implementation. In 2016, the United Nations Population Fund published the Population Situation Analysis and its data was based on the 2014 Demographic and Health Survey. One of the objectives of the analysis was to serve as a basis for monitoring the implementation of the National Population Strategy. The analysis showed that the goals adopted in the National Population Strategy were not achieved due to lack of resources, weak coordination, disruption of the institutional framework, centralization, and the absence of monitoring and evaluation. The analysis added that one of the factors that were overlooked in the National PopulationStrategy is the urgent need for more data and information to follow up on implementation.

In addition, the report flagged the oversight of monitoring and evaluation in the National Population Strategy and added that such shortfall explains previous failures in this matter. The report included several recommendations in this regard, including :

On the other hand, the lack of coordination between population policies and family planning stakeholders leads to weakening at the service level. Despite the National Population Council's mandate as a coordinating council that oversees population policies in general, the outcome was not always positive. The interconnectedness of population issues and family planning and reproductive health has led to the overlapping of many governmental and international agencies working to limit the population increase, and scattered efforts and resources due to poor coordination among them.

In light of what was discussed in the Egyptian Parliament regarding the poor performance of the National Population Council and the lack of clarity of the follow-up and evaluation mechanisms that were established in the National Population Strategy 2015-2030, six experts were hired last year by the council to evaluate the implementation of the strategy, the evaluation period took three months, and it was concluded that what had been implemented was less than 40% of what was planned. However, the Ministry of Health and Population at the time declined to publish the results of the evaluation to avoid the embarrassment the announcement of this result might cause.

Given the historical background of the establishment and development of the National Population Council, we can note the instability of the organizational and legal structure of the council, which is one of the reasons for confusion in population policies. In 1965, the Supreme Council for Family Planning was established, to be under the presidency of the Prime Minister. It was concerned with the following:

1) Develop a comprehensive planning for family planning programs in Egypt and setting a specific timeframe for implementation, follow-up and evaluation.

3) Coordinate between the various agencies that contribute to this program.

In 1972, the decision was amended to place the Council under the chairmanship of the Deputy Prime Minister. In 1985, the Council was reconstituted with changing its name to become the National Population Council, headed by the President. The law defined the council’s tasks, including preparing population policies that achieve the highest possible rate of economic and social development, and approving annual programs for population projects, such as:

The scattering of strategies, initiatives, community interventions and indicators without collecting, publishing, and analyzing data periodically, prevents an actual measurement of the quality of services provided to people, and their potential improvement. It also reduces a very complex social, economic and cultural reality and distorts our understanding as to what is the impact of all those interventions on the autonomy and efficacy of individual choices for reproductive health. The Population Situation Analysis showed that most of the indicators related to fertility and reproductive health are derived from surveys conducted with sample sizes and time spaces that do not allow calculating the indicators at the level of small administrative units.

One of the recommendations contained in the Demographic Situation Analysis Report is to build an observatory of population data and indicators, confirming that there is currently no way to collect data and indicators and organize them in useful ways for planning, following up and evaluating the strategy, or presenting them to researchers and stakeholders. The UNFPA report also indicated that there are information gaps and the need to use new methodologies to fill these gaps.

Family planning services are essential to promoting the well-being and autonomy of women and their families, and ensuring quality of care in contraceptive services is critical to achieving the highest standard of health. The three most important problems regarding the reality of reproductive and sexual health services in Egypt are summarized as follows:

In order to ensure the quality of services and to ensure the availability and accessibility of reproductive and sexual health services, we recommend the following: