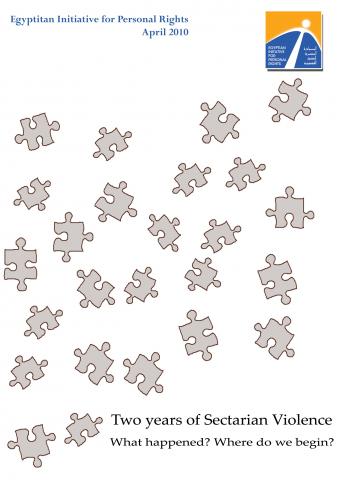 Introduction- 1.  Egypt is no different than other societies comprised of individuals and groups espousing different religious beliefs and affiliated with various religious communities. Many societies are able to live with these differences and, indeed, build on this diversity to enrich public life. Other societies, whether by design or default, are unable to manage diversity, some to the extent that they are unable to uphold coexistence. One of the most significant manifestations of social sectarian tension is the outbreak of violence between individuals or groups of various religious communities, like those seen with increasing frequency in Egypt over the last few years. With time, and without the proper intervention of the state, these events become more common and varied, and spread geographically. If a society reaches this point, it must realize that it faces a real danger of becoming a society of isolated, polarized sects with conflicting interests. Each of these polarized sects may then begin to use whatever force and influence it possesses to extract what it views as rightly theirs or to stop what it views as threats to its interests. Such a scenario may end in widespread civil conflict as has happened and continues to happen in many countries, some not so far from Egypt.

2. Sectarian violence is one of the most serious problems that can face any society — and which has struck Egypt — because this type of violence strikes society at its roots and propels it towards fragmentation. As such, the Egyptian Initiative for Personal Rights (EIPR )stresses that addressing the issue of sectarian violence requires political will, an awareness of the danger, hard work, cooperation among all state authorities and the effective participation of civil society to elaborate short-, medium- and long-term plans to address and ultimately eradicate it.

3. Many state officials, security officers and legislators deny the existence of sectarian violence in Egypt. This is the first problem that the Egyptian state must overcome: denial. Others minimize the extent of the problem. This is another problem: disregard. Yet others believe that it is a security problem that requires the application of the ongoing state of emergency. This is a third problem: shortsightedness. A fourth group of officials believes that sectarian violence is the problem of one state authority instead of all of them. This problem requires accountability, for it is shirking responsibility.

4. The EIPR has worked to document most instances of sectarian violence since the beginning of 2008 as part of a larger effort to monitor and document developments relevant to freedom of religion and belief in Egypt. This was prompted by a realization of the seriousness of the issue, and the risks it poses to society, as well as EIPR's desire to reach a deeper understanding of the current state of religious tensions in Egypt and their causes in order to confront this danger. Motivated by a sense of social responsibility, the EIPR presents this study to all public officials and citizens, in the hope that they will realize the gravity of the situation and take proactive steps to change it and eliminate the manifestations of a sectarian society. Ultimately, the EIPR hopes that Egypt can become a healthy society comprised of individuals and groups of different faiths, all of whom believe in difference and diversity, and particularly religious diversity; a society in which rights and freedoms are respected for all citizens without discrimination.