A new EIPR report: "Ignoring the Dead - where have the graves of ‘The Free Thinkers’ and believers of unrecognized religions gone?" 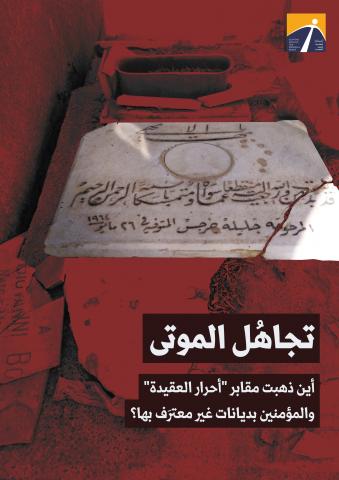 From the middle of the nineteenth century up until the end of the sixties of the twentieth century, Egypt - in both Cairo and Alexandria - witnessed the presence of cemeteries dedicated to non-believers of any religion under the name of “Civil Cemeteries” or “Cemeteries of the Free Thinkers”. During the period from 1944 to 1954, decrees and administrative decisions were issued to allocate cemeteries for believers of other than the three recognized Abrahamic religions, in the cities of the Suez Canal and in Cairo. These decisions included a reference to the use of these tombs by the Baha'is. Several official maps of Egyptian cities had also documented the presence of these cemeteries.

Only one exception remains from this history, with only neglected remains of the rest of these graves, which are no longer available for burial of the dead. The encroachments are still continuing on those remains, to the extent that indications of their presence have disappeared from the latest official maps.

The report “Ignoring the Dead” traces the history of these cemeteries through testimonies, historical documents, official decrees, and maps. It also documents the remnants of these graves  with field visits and photographs. In the background of telling the story, this report compiles several elements of the  legal framework regulating the use of the graves by different religious groups. This is compared against  testimonies of members of the affected religious groups about the current situation of burial of their dead. “Ignoring the Dead” draws attention to the need to preserve what remains of this necessary tradition that documents the history of respecting the most basic human rights for all spectrums of religious diversity for citizens and residents in Egypt.

The EIPR report sheds light on the need to continue this tradition as an acknowledgement of religious diversity and freedoms. Ignoring the Dead recommends that the government take in consideration the current demands for allocating cemeteries for all those who do not follow the three Abrahamic religions; Particularly, for those who are granted the right for a “blank space” or a “dash-“ in the religion field on their national ID cards.