External debt increases during first year of COVID-19 pandemic, each Egyptian indebted by $900 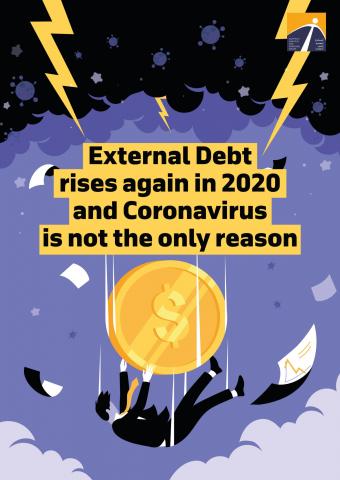 Today, March 31st, the Egyptian Initiative for Personal Rights published the English translation of its periodic report on external debt, titled “External Debt rises again in 2020 and Coronavirus is not the only reason”. The report that was published in Arabic in August 2021 is the most recent issue of the series on foreign debt, which has been published by EIPR since 2017. It shows that Egypt’s external debts jumped in 2020, the first year of the COVID-19 pandemic. On a first look, it may seem that the Egyptian government’s efforts to combat the virus were the main reason behind such a spike. However, data analysis suggests the increase fits within a decade-long trend of growing external borrowing.

According to the report, the Egyptian government has put in place several measures to avoid a depreciation in the value of the Egyptian pound, given the lack of USD resources brought about by the economic aftershocks of the pandemic. Such repercussions include short-term government securities speculators leaving the Egyptian debt market and a decline in foreign investment inflows and tourism revenue. Resorting to external borrowing was among the measures the government adopted to confront current circumstances and emergencies.

The report adds that the annual increase in external borrowing has accelerated after  Egypt’s 2016 agreement with the International Monetary Fund. Between 2017 and 2020, the total debt has increased by more than 100 percent, and has nearly quadrupled since 2010. The debt-to-GDP ratio in 2020 reached 35 percent, compared to 15 percent in 2010. With this acceleration in foreign borrowing, the external debt per capita has more than doubled to $900 per Egyptian in 2020, up from $400 a decade earlier.

What exacerbates the disadvantages of mounting loans, according to the report, is that it is not directed toward USD-yielding projects, and it does not serve social spending in key areas such as education, health, and social aid. Data from official reports state that only  3.6 percent of the total external government borrowing is allocated to education, health, and measures to alleviate poverty.

The most important debt instrument this year was the treasury bills for foreign investors which are EGP loans repayable in less than a year. The total values of T-bills stood at $26 billion in January 2021. Those loans are not included in the total external debt figure, but it is necessary to consider them when assessing the external situation, as the holders of such bills are foreign entities, and reimbursements are made in USD, which constitutes a burden on the exchange market.

Foreigners sold off 60 percent of the T-bills bought from the Egyptian market during the partial closure from March to May 2020, due to the fear of economic risks around the globe amid the COVID-19 pandemic, leading to the exit of an estimated $18 billion of

USD resources. However, Egyptian authorities increased interest rates, which soon allured foreigner investors to return to lending to the government through buying T-bills seeking higher profits (despite Egypt’s status as a high-risk country, along with South Africa and Turkey), as Egypt has one of the highest real returns on T-bills investments in the world.

Such a situation has helped increase foreign loan repayment provisions along with their potential commitments to 50 percent of foreign exchange reserves in September 2020. In other words, more than half the foreign currency reserves kept by the Central Bank of Egypt are allocated to repay short-term loans. One key index of an exchange market’s stability is the number of months that reserves can pay for commodity imports. In December 2020, that figure was eight months. However, if short-term loan dues are excluded, the remaining reserves fail to cover four months of imports.

Egypt’s annual debt service has increased in recent years. According to the report, during the 12-month period ending in March 2020, Egypt had to repay a record-shattering $28.6 billion, exceeding the total value of exports, and amounting to around quintuple the revenues from the Suez Canal over the same period.

If calculated in EGP, such an amount would express three times the current education budget, or five times the health budget. Loan repayment provisions are “resources that should have stayed in Egypt and been directed towards fair and green development,” according to the report.

Due to the annual repayment of such vast sums, Egypt resorts to recycling its debts — in other words, reborrowing to repay. Such a conundrum raises many questions about how fragile the Egyptian economy is, and the extent to which its faculties have been strengthened during the past 10 years, which have seen an expansion in debts, to become a stronger shock-enduring economy that doesn’t depend mainly on external borrowing.

This situation contradicts with policies of prudential borrowing, as “the state should plan its development needs, then estimate the forex required accordingly, and hence, know the amount of USD it needs that cannot be covered by its main foreign currency resources, including exports, attracting foreign investments, tourism revenues, remittances from workers abroad, and the Suez Canal,” the report adds.

The report includes several recommendations such as:

1- Reopening public debate to work toward a trade-off between foreign debts and internal debts, and to discuss the need for transparency, oversight, and accountability over how external debt is spent

2- Returning the foreign debt file to the hands of the government, with parliamentary oversight, so that no foreign debts can be contracted without permission from Parliament, regardless of the borrower.

3- Devising a pre-announced five-year plan for projects funded through external borrowing along with a parallel plan to develop USD resources that allow repayment, both parliament-approved the government will be accounted according to the degree of its commitment towards implementation of this plan.

5- Restructuring external debts to postpone maturity as well as readopting the percentage of 90 percent long-term loans.

7- Increasing transparent and regular publishing of data in keeping with international standards.