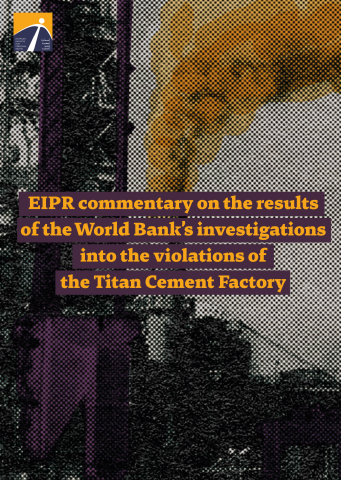 The Egyptian Initiative for Personal Rights (EIPR) issued a comment on the report released lately by the Investigation office  of the World Bank Group (CAO)  on the complaint against the Alexandria Portland Cement Company (Titan Cement Factory), and the  International Finance Corporation ( IFC) , the private sector arm of the world bank Group, which funded the establishment of the company.

The results of the investigation, which took  more than 6 years to be finalized,  confirmed the validity of the complaint and the responsibility of Titan cement factory with regard to the negative impacts on the environment and health of the residents as well as  violations of workers’ rights.

The complaint was submitted by EIPR, in coordination with other civil society organizations and with the residents of Wadi al Qamar and former workers in the factory. The submission of the complaint to the Compliance Advisor Ombudsman Office (CAO) dates back to April 2015, CAO is the independent accountability mechanism concerned with investigating complaints from those affected by projects supported by the IFC.

The complaint was based on the factory's violation of the environmental and social sustainability standards adopted by the IFC and to which  parties financed by the IFC are obliged to adhere throughout the financing period. It is worth noting that the IFC had published these very standards after being subjected to wide-ranging criticism for many years from human rights groups for supporting projects that do not comply with the accepted international standards and that seriously harm the environment, workers and communities rights.

Among the most important issues of the complaint were the harm to the health and safety of residents resulting from the pollution caused by the factory; the factory’s violation of Egyptian laws stipulating and governing environmental impact assessment studies and the validity of the operating licenses; as well as weak community engagement. The complaint also referenced violations of the rights of contract workers with regard to wage and benefits and their health and safety, and violations of Egyptian and international laws that provide for rights to collective bargaining  and violations that occurred in the violent dispersal of a peaceful sit-in. This is in addition to complaints related to the entitlements of a number of early retirement workers.

The CAO investigation report confirmed that the IFC erred since the beginning of the contract period with the company , as the environmental and social impacts were not evaluated in proportion to the nature of the project, its size and its proximity to the residential area. The report’s findings confirms the negative health and environmental impact brought about by the dust emissions levels that were much higher than the accepted international standards, in addition to the  very high noise levels and vibrations which were strong enough to cause cracks in the nearby houses and residential buildings.

Throughout the life of the project the investigation report showed that the IFC failed to properly perform its role in  supervising the factory to comply with  the accepted  environmental standards, protect workers' rights, or to disclose data transparently.

The action plan which the IFC submitted in response to the results of the CAO investigation report, unfortunately,  does not respond to the most important results of the investigation report nor to the most important concerns of the complainants. The plan issued contains absolutely no  response or actions to any of the labor issues, nor to any of the major environmental problems. Even the few actions recommended by the IFC included in the plan  were conditioned by the approval of the Titan company itself, on the pretext that the IFC had divested from Titan in 2020.

This complaint is the first of its kind submitted to the CAO office from Egypt, It is also one of the rare complaints from the Middle East, and of the few that has reached the final stages of investigation.   It is  quite unfortunate that the complaint took more than six years, only to be met with such a weak response.

EIPR maintains that without a commitment to an appropriate  time limit for completing investigations, and without a commitment from the IFC  to respect the findings of the investigations and their recommendations, and moreover without developing an effective action plan that responds to all the findings, that include compensation and redress for the damages that the investigation has documented and proven even after the end of the contract period with IFC - without all of this, the IFC’s Environmental and Social Sustainability Standards will merely be ink on paper.