Ahead of COP27: EIPR presents an emergency plan to confront climate change in Egypt 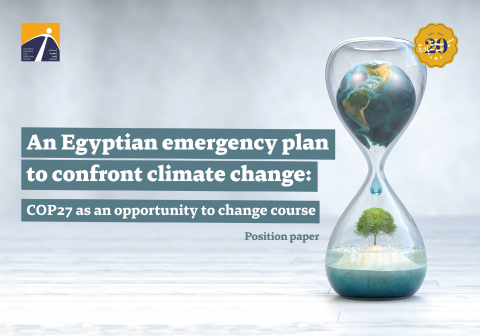 Ahead of COP27: EIPR presents an emergency plan to confront climate change in Egypt

The paper outlines an urgent plan for proposed policies to deal with the repercussions of climate change in Egypt from the standpoints of environmental and climate justice, coinciding with Egypt's hosting in early November of the 27th session of the Conference of the Parties (COP27) to the UN Framework Convention on Climate Change in Sharm el-Sheikh.

With the existential challenge facing the world due to climate change, which coincides with a pandemic, a financial and economic crisis, a war on European soil, and an exacerbation of economic and social inequality, Egypt is exposed to more dangers than others due to natural geographical reasons. It also lacks flexibility in facing these risks due to social structural reasons and lack of financial resources.

Climate change will particularly affect the northern coasts of Egypt, food security, biodiversity, water and health adequacy, and all aspects of life. The impact will be greater on the weak and the poor, and EIPR recommends that the greater focus of the government’s environmental policy should be on confronting the dangers of adaptation to the repercussions of climate change, while not neglecting the just transition towards a low-carbon economy by dealing with the causes of emissions, in which Egypt’s contribution does not exceed 0.6% of global emissions.

In this paper, EIPR presents a review and critique of the Egyptian policy outlines towards climate change and urgent and detailed policy recommendations regarding priority areas such as the transition towards renewable energy in electricity generation; reducing the use of fossil fuels and coal, including the cement industry, the problems of using nuclear energy, and issues related to green and blue hydrogen production, natural gas production and the reversion to diesel in electricity generation.

The paper also details urgent recommendations in the field of reducing air pollution, solid waste and plastic, as well as health, food and water issues, in addition to the issue of climate finance and the need to focus on adaptation issues and demand debt cancellation instead of more borrowing, and giving the issue of climate and the environment a central place in public expenditure priorities.

EIPR emphasizes the need to proceed in dealing with the issue of climate change from the principle of "common but differentiated responsibility", which places the greatest burdens on major polluters in the world and locally, historically and at the present time.

On the other hand, the Egyptian government policy is still far from putting the emergency climate crisis in the necessary position to protect the economy and society and avoid the increase in social and environmental inequalities that are likely to exacerbate severely, unless appropriate measures are taken as soon as possible. The government adopts a discourse that rightly focuses on the issue of the responsibility of developed countries and the importance of external climate finance; but the practical policy still tends towards mitigation, which is the priority of the developed countries, and focuses on loans and attracting investments of large companies, more than other tracks and tools. This is coupled with the absence of clarity and transparency regarding the procedures and guarantees for the justness of the required transformation, and the absence of localizing the environmental issue in economic policy. Hosting COP27 in Egypt next month will be an opportunity to formulate an urgent practical contingency plan to deal with the crisis and change the course of government policy.

To read the paper: