Invitation for a press conference

State crimes remain unpunished: the Interior Ministry is above the law

and the Public Prosecution is missing in action

The Egyptian Initiative for Personal Rights (EIPR) said that the Court of Cassation’s ruling today to overturn the conviction of ousted president Mubarak and his interior minister Habib al-Adli was the expected outcome of a flawed, disappointing t

With the End of More Than 30 Years of Emergency Rule… EIPR: A First Step Towards Establishing the Rule of Law and Ending Impunity

Today, the Egyptian Initiative for Personal Rights (EIPR) welcomed the end of the state of emergency, which had been in place for more than 30 years.

Five human rights organisations today held a press conference calling for a ban on the use of firearms in dispersing demonstrations.

In the aftermath of the bloody events which took place in Port Said on Wednesday 1 February 2012, the Egyptian Initiative for Personal Rights (EIPR) sent a fact-finding mission to the city.

Will the Court of Administrative Justice Stop the Killing of Demonstrators?

On Tuesday, 17 January, the Court of Administrative Justice in Cairo will hear a case filed to suspend and abolish the Interior Minister decree permitting the use of firearms and live ammunition to disperse demonstrations and sit-ins (Decree 156/1 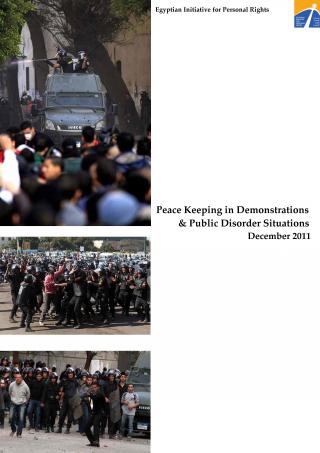 In Response to the Army and Police's Allegations: The EIPR Releases a Code of Conduct for Policing Demonstrations and Public Disorder

The Egyptian Initiative for Personal Rights (EIPR) said that the recurring statements made lately by the Supreme Council of the Armed Forces and Ministry of Interior officials about the legitimacy of the use of violence against demonstrators, are

On the Third Day of the Cabinet Confrontations Between Security forces and Demonstrators: The Latest Toll of Wounded and Arrested